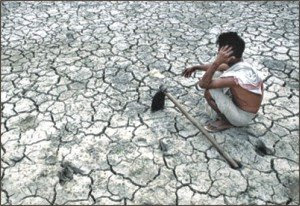 «World Health Day — 7 April, marks the founding of the World Health Organisation (WHO). It draws attention to a subject of major importance of global health every year.

WHO selected this theme in recognition that climate change is posing ever growing threats to global public health security. Health is one of the areas most affected by the climate change.

The Earth’s atmosphere is very thin, half lies within three miles of its surface and the concentration of CO2 in the atmosphere is rising fast. There is now no serious dispute that this is causing a rapid rise in the Earth’s temperature and that this brings with it imminent dangers.

The threat to human health is of a more fundamental kind than is the threat to the world’s economic system, says Prof McMichael, a Professor of Public Health from the
Australian National University. “Climate change is beginning to damage our natural life-support system, he added.

The World Health Organisation estimates that a quarter of the world’s disease burden is due to the contamination of air, water, soil and food — particularly from respiratory infections and diarrhoeal disease.

Climate change will make these and other diseases worse. While it is unlikely to cause entirely new diseases, but it will alter the incidence, range and seasonality of many existing health disorders.

By 2080, between 20 and 70 million more people could be living in malarial regions due to climate change. Health hazards from climate change are diverse and global in nature. The hazards range from higher risks of extreme weather events to changes in the dynamics of infectious diseases. Many of the leading killer diseases are sensitive to climatic conditions; their incidence and spread are likely to be affected by changing weather patterns. The health impacts of climate change are already evident in different ways: more people are dying from excessive heat than before, changes are occurring in the incidence of vector-borne diseases and the pattern of natural disasters is altering.

These health hazards and impacts will be disproportionately greater among the vulnerable populations, which include the very young, elderly, medically infirm, poor and isolated populations. Vulnerability is also observed to be high in areas with a high endemicity of climate-sensitive diseases, severe water scarcity, and low food production. Spotlight should also focus the small-island developing states and mountainous regions; and mega-cities and coastal areas in developing countries.

Moreover, in many parts of the world, large populations will be displaced by rising sea level and affected by drought and famine. As glaciers melt, the hydrological cycle shifts and the productivity of arable land changes.

2. Advocate for interdisciplinary and intersectoral partnerships from the local to international level that seek to improve health through rapid deployment of mitigation strategies to stabilise climate change and development of proactive adaptation programmes to minimise health impacts.

3. Generate effective actions by local communities, organisations, health systems and governments to reduce the impact of climate change on health through urgent application of mitigation and adaptation techniques.

4. Demonstrate the health community’s role in facing the challenges globally and in regions, countries and communities.

5. Spark commitment and action among governments, international organisations, donors, civil society, businesses and communities (especially among young people) to anchor health at the heart of the climate change agenda. The health impacts of climate change will be difficult to reverse in near coming years or even decades. But some of potential impacts can be avoided or prevented. Controlling disease vectors (fly, mosquito, flea), reducing pollution from transport, and efficient land use and water management can be measures given emphasis. Clean water and sanitation; safe and adequate food; immunisation; disease surveillance and response; safe and effective disease vector control; and disaster preparedness are all critical components of public health practices that are also adaptations to climate change. These programmes need to be strengthened globally with special concentration of effort in high-risk locations and populations in order to prevent climate-related injury, disease and death.

Some steps needed to prevent climate change have positive health benefits. For example, increased use of bicycles and public transport instead of personal cars in industrialised countries will reduce greenhouse gas emissions. It will also improve air quality and lead to better respiratory health and fewer premature deaths. The increase in physical activity from cycling and walking may lead to less obesity and fewer obesity-related illness. The sooner these steps are taken, the greater their impact will be on public health.»